Well, Christmas half over. We had celebrations with part of the family on the day itself, and will get together with other family on Saturday. Nothing like spreading the holiday out for as long as possible! Plus, since we haven’t had either gathering at my house I haven’t had to do very much apart from make food to take.
I’ve been making a Christmas tree table decoration out of quilt fabric to take on Saturday, from a picture sent to me by my aunt in England. She’s been making them to sell at a charity bazaar to raise funds for the local hospice. Mine isn’t quite finished yet, I’ll post a photo when it is, but I found a few examples of similar ones on the web.
One being sold on Etsy, here,
and a tutorial to make something similar here.
Since I don’t know where my aunt got the idea from I can’t credit the original designer, but they seem to be fairly common so perhaps lots of people had the same idea. My Google search also turned up some other interesting ideas, which I should put to one side and think about before next Christmas – how likely is that to actually happen!
A photo for now, the lily bulbs I planted in the spring are now flowering beautifully. They are Lilium longiflorum I think, known in Australia and possibly other places as Christmas lilies for fairly obvious reasons. I am really impressed with these, the bulbs I bought were a really good size, so I had high hopes, and they are certainly living up to it. The bulbs came from a place called Tulips with a Difference, in South West WA, and here is one of the flowers.

I finally managed to find again the tutorial for making kanzashi, on a blog called Kinomo Reincarnate, here.   These are a bit more sophisticated than the way I was shown how to do them with more stitching on the backs, but I think it pays off since they look as if they would hold their shape better. I have to admit they are also smaller and generally more neat and elegant than mine. If I make any more though this is the way I shall try.
I haven’t done much crafting lately, although I am working on a new project, but since I plan to enter it in a contest it will have to be secret for now. I’ve also been busy getting ready for Christmas, at least that’s my excuse. I plan to have a relaxing and peaceful time with family, both two and four legged, and I wish everybody else the same, or at least whatever they would wish for themselves.

I can’t believe it’s been about three weeks since my last post, where did that time go? In my defence, work has been busy, and I’ve been busy at home. Getting the garden and property in general ready for summer, cutting grass, clearing bits of dead bushes, pruning etc, in readiness for the risk of a bushfire. I added some more sprinklers to the rooftop sprinkler system, which is designed to protect the house in the event of a fire nearby, and which of course I hope I never have to use.
During last week we had two or three days of weather which was more like winter than almost summer, very strong winds, rain, and cold. Fortunately there was not much damage to my property, a couple of branches down out in the paddocks is about all. Sadly though a large dead tree which has been standing, dead, in the paddock since I moved here almost 10 years ago did fall over. By the look of it I reckon it could have been dead for 5 years easily before I moved here, so I guess it had to fall over at some point. I had planted some new replacement trees around it, and fortunately it didn’t fall on any of them, so that was lucky. They are only about 2 or 3 feet high yet though, since they only went in last winter, so they have some growing to do.
I’ve also been doing some craft stuff. I bought my new overlocker last week, but haven’t really had much chance to play with it yet. It’s a Husqvarna, here. My only reservation about it so far is that it doesn’t have a free arm, but I do still have my old Singer machine, which I think I can get serviced, and use the free arm on that. The reason for picking the Husqvarna was that the front part opens up so that you can see more easily to thread, and it also has more room to the right of the needle. Also the cutting blade is underneath, which means more space around the needle, and it comes with a five year warranty, against only one year on the Singer I was considering. I’ll write a more complete review of it when I’ve had time to play with it a bit.
Yesterday was ATASDA branch meeting, for which we were supposed to make a Christmas card to exchange. It’s been years since I did any card making, but I burrowed through my box full of bits, and found some blank cards, which was a good start. Also some tissue paper with a gold pattern on it, and some brown card. I tore the tissue to a Christmas tree shape, cut a pot shape out of the brown card, and stuck both onto a card. A few weeks ago I had picked up some flowers which had fallen from my olive trees and pressed them, so they came handyfor little stars. A gold sequin glued at the top, and a line of stitching round the edge of the tree in gold thread, and voila! I was quite pleased with the result. 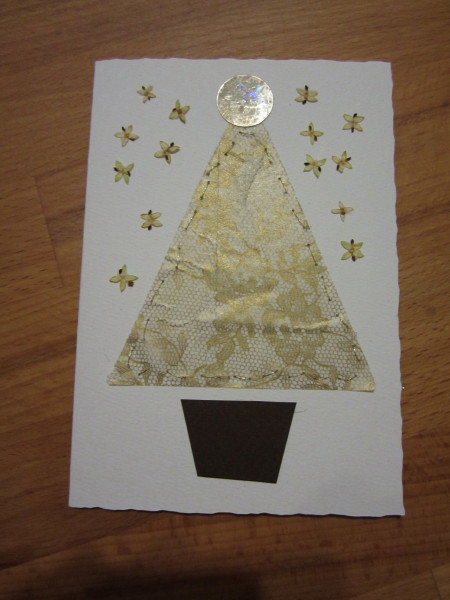 Now I have to find something to take as a gift to Red Hats next Saturday, and I still intend to make zines to taking to writing group on Sunday, but for now, back to the garden. The storm has left more leaves and rubbish lying around, and since the forecast is for 37 degrees on Tuesday I want to get some more done before it gets too hot.