I bought a second hand book on creative writing in the op shop this week, and it has a number of exercises to work through. The first is to write a short story about the view from a window, in first person, and restricting yourself to just the view from the window. I thought about it for a bit, and came up with a germ of an idea. Now when I was browsing the net at work I found a contest for flash fiction, and have decided to write the idea up to less than 350 words, the limit, and put it in the contest. The serendipity is a bit too good to ignore. The idea isn’t enough for a longer story, at least I don’t think so, but 350 words should be OK. Obviously they have to be well crafted and honed.

I don’t know why I’m here. I know where I am, in hospital, but I don’t know why. Nor do I know how long I’ve been here for, at first I was unconscious, but it’s been at least a week since I woke up.

They don’t know I’m awake, the nurses and doctors. I can’t move to tell them. They come and go through the day, taking my temperature and pulse, adjusting knobs and dials on the machines around me. There is a drip stand next to the bed, feeding fluid into my arm, which they check regularly and change when it is empty.

I lie here, looking through the window in the wall opposite the bed. There is not what you would call a view to look at. Just a piece of brick wall, about 10 feet away from the window. Nothing ever goes between the wall and the window, so I’m guessing it’s not a ground floor window, or even a first floor one. On sunny days a shadow moves across the wall during the day, it must be the shadow of the building I am in. I watch the wall all day. I’m often awake before daylight, and I see the first golden tinge of sunshine on the bricks. The sun is still low in the sky, and the angle of the light emphasises the texture of the wall, throwing shadows into the lines of mortar between the bricks. It’s the same in the evening from the opposite direction. When there is no sun the wall seems flat . some days I can tell that there are clouds moving across the sky, as shadows come and go over the wall. Yesterday there was no sun, and several times it rained. I watched as it started, seeing the first dark flecks appear on the brickwork as drops of water hit, more and more until the whole wall was glistening and dark blood red. Then as suddenly the rain stopped, and slowly the wall changed colour again as it dried, until it was pale as usual.

for some reason I can’t help studying the wall. Granted it’s all I have to look at, I can’t move my head enough to look around the rest of the room. There is a loose piece of mortar in the bottom left hand corner which really bugs me. The bricks are laid in a slightly unusual pattern called Monk bond. That thought comes to me from I know not where, and suddenly reality hits me.

I know why I’m here. I’m a steeplejack.

This needs a lot of work I’m sure. In my head this is the 1950s or 1960s, I don’t think they have steeplejacks these days. Need to be more descriptive to make the era obvious. I’m not sure I’m a story writer at all, let alone flash fiction or short stories. Obviously for short stories or flash fiction every word has to count.I decided to not put this in the contest I read about, too much of  a rush apart from any other considerations.  I might finish this sometime and get some feedback from the group, but I think for this month I’m probably going to write an article, although it will have to be quick now. Also I promised to look at the options for putting an anthology together, printing and binding etc. Haven’t done that yet, so need to get my skates on with that too!

This is a photo of a Geraldton wax currently flowering in my garden. This particular bush is quite old and leggy, but is flowering particularly well this year.

Geraldton Wax, not sure of the exact species

I finally got around yesterday to taking some photos of the wallhanging I entered in the Show, and here they are.

Sorry I wasn’t able to resist leaving the prize card on it! Some close up shots:

One of the ways I created texture in the piece was to attach shells to it, some which I had collected many years ago on the beach, I think in Rockingham or Kwinana. I made small pieces of machine embroidered ‘lace’ using water soluble stabiliser, stitching over it randomly in roughly circular motion. After washing out the stabiliser and drying the pieces, I laid them over the shells on top of the background fabric, and stitched around the edges, using the same kind of random circular motion, so that it looks as if the lace is growing out of the fabric. I was aiming to imitate the way shells and stones sometimes get embedded in rock.

I made this texture by stitching from the wrong side of the fabric, with the top tension really loose. The top thread gets drawn to the underside in big loops. I then ironed on some fusible interfacing on the wrong side to hold the threads in place, and pulled out the bobbin thread, leaving the loops behind. 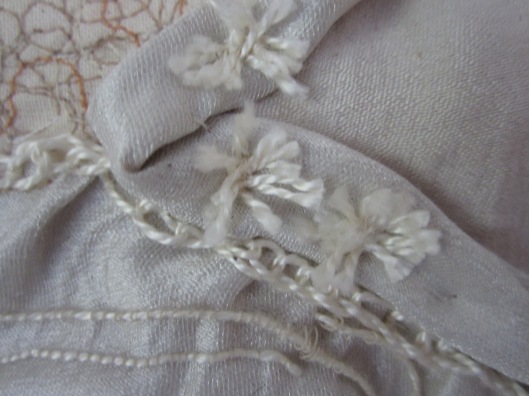 I made some crochet chain out of perle cotton, and hand stitched it down – machine stitching flattened it too much. The little bunches of threads that look a bit like flowers I made by looping the thread and stitching over it, then cutting open the loops. A wooden skewer is really useful for holding threads and so on in place while you stitch them down. It’s smaller than fingers, and doesn’t hurt so much if the needle goes through it!

I’m pretty pleased with the way the piece came out, and it’s certainly inspired me to have another go.  I already have a couple of ideas in mind, in the meantime I’m going to turn my attention to making some skirts to wear for work this summer.

i’ve decided to take part in this week’s weekly challenge the challenge is to write in some way which is different to what you would normally do, so i’m going with stream of consciousness. it’s so much a stream that i’m resisiting punctuation and capitals but i’m struggling with that, can you tell?
after all if you don’t have punctuation how can you tell which bit is a question and where you should take a breath. it must be much harder to read surely. perhaps it would be good to give this to all the people who seem to think that twitter and facebook etc can do perfectly well without punctuation or any kind of grammar. a case in point. i recently advertised on a local web site that i had a fish tank to give away free. i had lots of replies, it seems the world and his wife are looking for a free fish tank, but guess why i didn’t give it to the person who emailed as follows;

ill grab it
wots ur number
mine is XXXXXXXXX
the number has been changed to protect the not to innocent, i can’t change their name because they didn;t even have the grace to put it in the email. how rude! i must admit though that the meaning or use of the word grab seems to have changed, at least here in australia. perfectly otherwise nice people will talk of just going down to the shop to grab some milk, or just grab that spanner for me would you? in my day grabbing was akin to snatching, and not something that polite people did
this seems to be not just stream of consciousness but also a rant, which is another option on the weekly writing challenge. i didn’t mean it to be so, perhaps it’s because writing like this is turning into really hard work. it seems my stream of consciousness needs some banks or weirs or culverts to give it form and direction, otherwise it just flows out all over the dry ground and soaks in without a trace. i’m going to post a photo instead. this is a scilla which is flowering in my garden just now, i think it’s Scilla peruviana, and i;m sorry but it needs a capital!

I went to the Perth Royal Show this week to see how my entries went, and much to my surprise I had won something! Actually, there were disappointingly few entries in the Machine Embroidery section, Hand Embroidery was much better supported. My wallhanging got first, out of two entries, the journal cover third out of two entries, and the pendant third also, although it was the only entry in the class so far as I could see. Obviously they don’t always give prizes if they think the standard isn’t high enough. That’s fair enough, and the wallhanging was certainly what I spent the most time on, so I am pleased that it won. I have to go pick the things up tomorrow, and I must take photos of them.

I am already inspired to try again next year, and I think I shall have a go at hand embroidery, since that is where most of the entries are, and so more of a challenge. I have an idea for a piece, possibly canvas work but definitely some sort of counted thread, based roughly on the drawing I did for TAFE. I don’t remember if I ever posted a photo of it, but here it is. 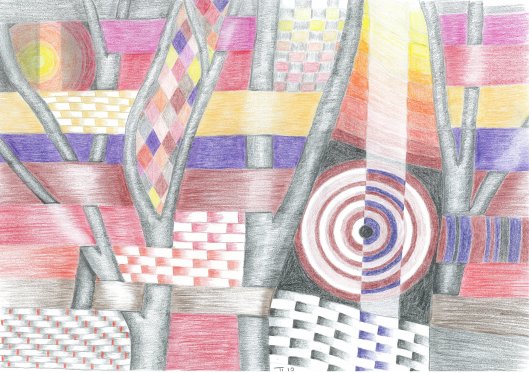 I think this could translate quite nicely, with the black and white bits being blackwork, and the colour being blackwork type stitches but done in colour. I have 12 months, give or take!

I got the latest edition of the Itch’n to Stitch newsletter yesterday, it’s very informative. I have already found a competition to enter next year, and have the idea of what I am going to do all planned out, more or less anyway. Watch this space! The newsletter is full of things to do, workshops, exhibitions, contests etc., and must entail a great deal of work to put together. Really worthwhile thing to have landing in one’s mailbox, unlike so much of the other stuff that appears there.