I’ve been having a major sort out of some stuff which has been kicking around for years, decades in some cases. This is a precursor to redoing my sewing space.

One of the things I came across, and which has been around for decades, is a piece of cross stitch. It is finished, and I have thoughtfully dated it 1994! It’s still not framed! 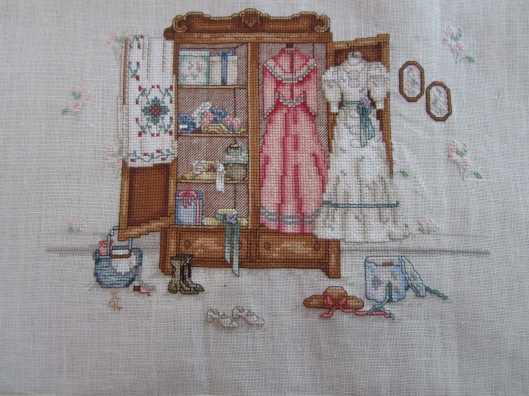 ‘A Cameo of the Past’ cross stitch design by Paula Vaughan, circa 1990.

At some point I have obviously flouted the golden rule of embroidery, and left my needle in the work, maybe for some years, who knows! There is a tiny rust speck, just to the right of the boots, which hasn’t come out, even though I have washed the piece. There may be a way of getting it out, but I’m not too bothered. I’m not against the odd imperfection, it gives character, don’t you think?!

So I have put it on the table in the sewing room in order to motivate myself to get it framed. The framing I will get done professionally, but I thought I would stretch and mount it myself first. A session on Google turned up what seems like a sensible, relatively easy and yet professional way to do it. It involves getting a piece of foam core board, cutting out a rectangle a bit bigger than the embroidery, and mounting the cross stitch on it with pins put into the sides of the foam core. I haven’t explained that very well, I will take some photos as I work and try to illustrate it a bit better. I found a few descriptions of how to do it, a good one is here at Wildfaces Gallery.

I have bought the board, but I didn’t have any of the short pins, which are variously called either sequin pins or applique pins. My local fabric shop didn’t have any either, so I ordered them online, but that was before Christmas, and they haven’t arrived yet – probably because it has been Christmas. Once they arrive I will be able to get started.

Out of curiosity I went looking for the pattern for the cross stitch. And I found it , on sale on Etsy. OK, so it’s a bit kitsch, but not nearly so bad as some other cross stitch patterns of the same era. I do remember that when I had finished it I had a lot of thread left over (there are lots of colours in the pattern, and it only uses a very small bit of some of them). Because of that I bought another similar pattern, thinking to use up the thread, but I have probably used quite a lot of it in other things over the years. I don’t remember what the other pattern was called, it was another of Paula Vaughan’s, but there are several that look familiar and I’m not sure which it was. Perhaps one day it too will come to light and I’ll start another cross stitch – it may also take 20 years to be finished and framed!