I got an email this morning from a company I bought some sewing patterns from a while back. Decades of Style pattern company have put photos of many of their patterns made up on their site, and the results are gorgeous. Not all of the patterns are there, but a good number of them, beautifully made, and with such authentic looking fabrics.

I bought some of their patterns months ago, mostly because I saw a blouse reviewed in Threads magazine, and when I visited the site the postage was the same price for up to 5 patterns. I’m ashamed to say I haven’t made them up yet, but seeing these photos has made me determined to bump them up the ‘to do’ list a little! That’s after I’ve finished a quilt for my Dad’s 85th birthday (in 2 weeks) and a dress for a Christmas function for my daughter, also in 2 weeks. Both are fortunately fairly simple projects.

Two of the patterns I bought from Decades of Style were blouses, the 1940s Girl Friday blouse, and the 1950s Collar Confection blouse. Both would be good to have made for the summer, I will make myself an appointment to go through the stash and see what fabric I have to use. Whilst the examples on the website are made of vintage inspired fabrics, I think they would translate quite well into contemporary fabrics if well chosen. Lightweight linen in a plain colour or small print would do fine, or a softer rayon type print. I am pretty sure I have something suitable somewhere.

Another project I’ve been giving some thought to lately is the re-organisation of my sewing space. Actually I don’t think the word re-organisation is valid, since that implies an existing level of organisation, which I can’t honestly say there is. I have a space, not huge but I think adequate, but it needs cleaning, tidying, and lots more storage. Not only that, but it needs to be organised so that I can find what I need, and don’t end up going out to buy more of something just because I can’t find what I already have. I can’t wait to go through all the boxes which are hiding in the garage and sort them out and create some kind of reference for what is in them. Most of the stash will have to stay in the garage since there isn’t room for it in the house, but it would be really good to know what was out there and where it was. A database of some sort is required I think, although I have thought of just taking photos of the content of each box and having them on my computer for browsing when I want something.

I’m also working on how to set up a cutting out surface. The space I have doesn’t really lend itself to a permanent cutting out space, which really needs to be at least 1.5 metres square, and preferably more, with room to walk around all four sides. I’m trying to come up with a project for fold-away cutting out space, but not too hard to put away so that I don’t bother to do it. My current thought is a couple of small chests of drawers, on castors so they can be moved, and with flaps hanging down each side which can be raised. Two chests together, and the flaps, I think can be made to give me a surface about 1.2 metres by 1.8 metres, and still be manoeuvrable in the room, which is only about 2.4 metres wide, although quite long.

Something similar to this, but I’ll probably try to make it myself, or at least put a top onto a purchased chest of drawers. That’s after the kitchen, and the tool cabinet in the garage which isn’t finished yet! And a few other things!

This week’s photos are what in England we used to call an Easter cactus, because it flowered about Easter. Here in Australia it flowers in spring, but that’s nowhere near Easter. I’ve Googled it, and I think it is properly called Hatiora gaertneri, the name being nowhere near as pretty as the flower, as usual. It is really spectacular this year, although I should have moved it into the sunshine before taking the pictures, it would have looked even better. 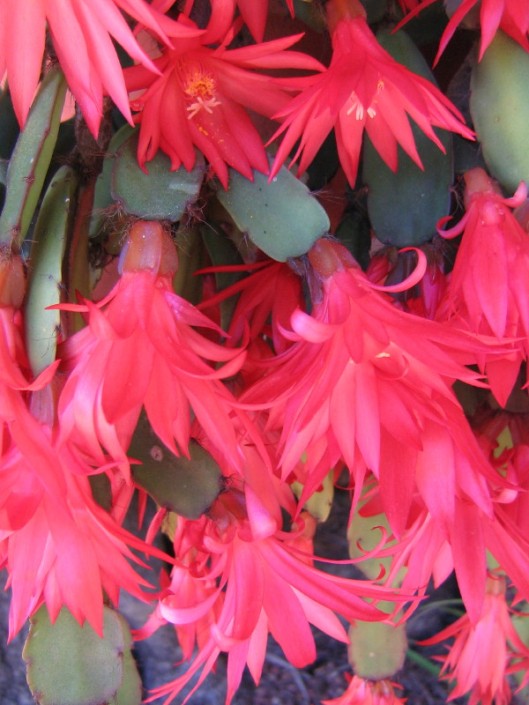