Well, Christmas and New Year holiday over and done, and already a week into 2013. We’ve had very hot weather here in Australia, in WA we had ours over the Christmas and New Year period, but now it’s in the Eastern States, where they also have bushfires to contend with. Sympathy and commiserations to people who have already lost homes and businesses, and fingers crossed that those who are missing will turn up safely. The threat of bushfire is something we live with every summer in this area, and much as I love living here, and have no intention of moving, I have to admit to breathing a sigh of relief at the end of each summer that we have survived.

As I write this it is actually raining, quite steadily, and although I haven’t been outside for an hour or two I would guess that the temperature has dropped a bit from the 38 degrees it was yesterday. That’s 38 degrees centigrade, so around 100 degrees for anybody who thinks in Farenheit. Even at 6 this morning it was still in the high twenties I think, overcast and very humid. Not quite what we would normally expect for January, but weather everywhere these days just seems to be unexpected. 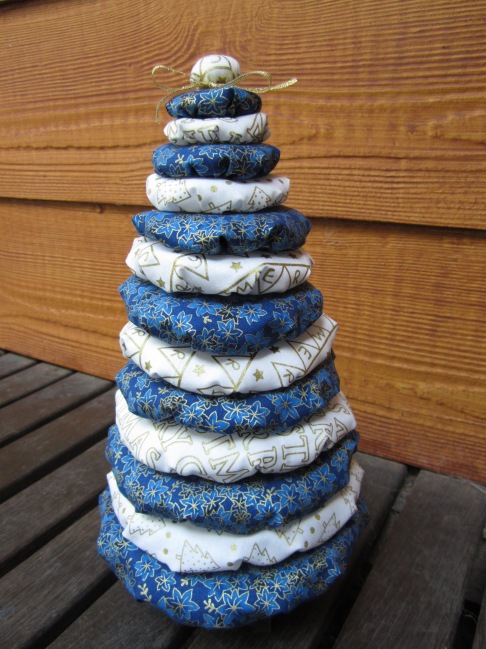 I finished the Christmas tree table decoration I was making, here is the picture. I was quite pleased with it. I had been going to put some decorations on it, but I couldn’t find the gold sequins I know I have somewhere, so yet another reason to get my craft space organised! I’m sure that when I start I shall find all sorts of things I’ve forgotten I’ve got, and probably two or three of some of them. It would be so goof to be able to find things just when I want to use them.