One of the ‘Inspiration in Every Issue’ projects I did finish, but have not yet written about, was inspired by issue number 68. There was an article entitled Pieced Silk Pins, by Karen Schmelzer. Her pins, which are what English and Australian people call brooches, were intricately made in silk, and more complicated than mine. She says they are generally about 2.5 inches in size, and one of the examples in the photograph has a beautiful strip of ‘flying geese’ across the middle of it, which must have been quite a challenge.

Mine are no bigger than hers, in fact only about 2 inches square. I didn’t go for such complicated piecing though. Strictly speaking I think they would all be classified as ‘crazy quilting’, since they are not even or regular. I made one based on a log cabin pattern, but without being square or regular, and the other two are just randomly pieced. I also decided that it would be easier to make the brooches themselves just random shapes, instead of aiming for the perfect square or rectangle. I added some beads for decoration, and sewed brooch pins on the back. Actually before sewing on the pins I pressed them, and that made a huge difference. What started out as a squishy odd-shaped lump became a quite flat, smooth and relatively even object, which looked quite professional, and like the pictures in the magazine!
Two of the brooches I gave away as gifts at our Red Hat chapter’s Christmas gathering, (that’s why they are purple and red) and kept the third. I would certainly have a go at making some more, they are quite satisfying, and use up tiny scraps.

Here are some photos: 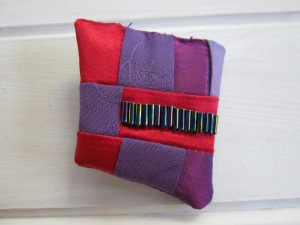 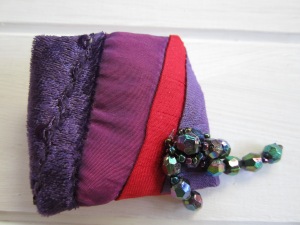 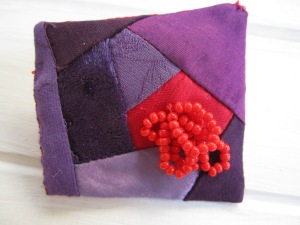 And here are some shots of the magazine and the original article. 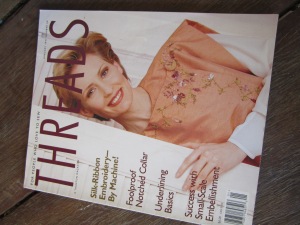 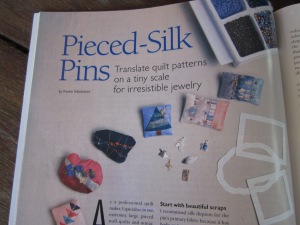 How I wish I knew how to make WordPress align text and photos on the page where I want them to be! I’ve even tried playing with the html, since I am learning (trying) to build websites at the moment, but I still can’t get it to look the way I want it. How hard can it be?!